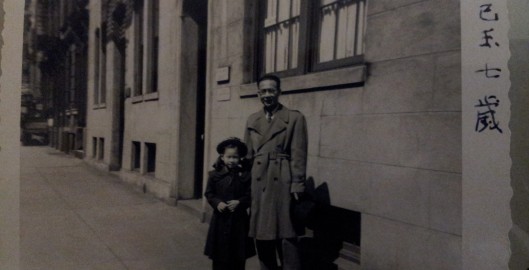 Why Germantown? I am finally getting answers to questions about my father’s decisions that have always alluded me. When I started learning about his groundbreaking contributions I was shocked. This was certainly not the father I knew. What I absolutely did not expect was that it would take me on a journey back to my childhood.

Several months ago, I learned that my father and some of his classmates spent six months living in Germany before he returned to Paris. It was then that he switched from studying art to architecture.  Thinking back, it made sense because I remember him telling me, many times, that he found the German people reliable and honest. He spoke often of his German friends, especially a woman named Helen. Auntie Helen, as I was instructed to call her, visited us several times in NYC and then, later, in New Jersey.

A week ago, as I was thinking about my father’s display in Singapore (if interested, you can read Jenn’s last blog on the Singapore Heritagefest), my mind wandered to random thoughts about our home in NYC. Rather than live in Chinatown, where the majority of Chinese immigrants lived in 1947, my father chose to reside in Upper East Side in Manhattan. Somehow, I always thought that it was because, as an intellectual, he had nothing in common with the entrepreneurs in Chinatown – an intellectual snob, so-to-speak.

Then I remembered the information about his time in Germany and his love for their  people. A light bulb went on! That’s why he wanted to be in Germantown, a place that was familiar to him – shops, restaurants, architecture. Thinking back, I pictured the Art Deco buildings in the neighborhood, the German restaurants with smells of  bratwurst and sauerkraut wafting onto the street, and the language that made him feel at home. Now it makes sense that he would have chosen something familiar, a time from his carefree years in Europe when his whole future lay before him.

An aside – I was so excited mentioning this aha moment to Jenn.  She  looked at me like I had two heads, then  reminded me that we had actually had the exact same conversation right after the information came in. I looked at her blankly, getting the sense that this felt familiar, but actually not having any actual memory of our talk. I suppose this confirms that we do not connect the dots until we’re ready to do so. And, here I thought this was such an original connection. Actually, I think the connection went deeper, more about who he was as a person.

It further makes me realize how much the European influence at that particular stage impacted his life and forever remained a part of his psyche. Perhaps this is why I feel so pulled to live in Paris and to explore the other European countries where he grew to manhood.