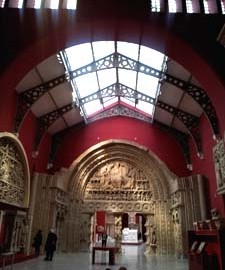 Surprise! We will be returning to Paris in October 2013.  We have been invited to display my father’s architectural designs at the Cite d’Architecture in their October 16, 2013 to February 17, 2014 Art Deco Exhibition,“Art Deco style Made in France“.

I will let Jennifer get into the details with you, while I will continue to express my feelings and thoughts on all that’s come about as a result of this conference.

One of Jeff Cody’s colleagues/friends approached me right after his presentation and told me about the forthcoming art exhibit. She set up a luncheon meeting with the curator and his associate. After viewing Liu’s architectural designs that my children found in Lyon, the invitation to be part of that exhibit came so quickly and casually, we weren’t sure we heard it right.

Then, when Jenn started to get into the details with them, I knew it was real.

After setting up the protocol for future communication, this same friend of Jeff’s told us that, since we plan to be in Hangzhou around that time anyway, she wanted to see if Liu could display at an exhibit in Hangzhou Academy of Decorative Arts that is being presented conjointly. She has since emailed her contacts there to see if there is interest. Hopefully, we will find out once she returns from her vacation sometime this week.

She invited us for dinner two nights later to talk about all these arrangements. She even suggested that, if they were not interested, we could see about doing something privately! Again, I am amazed at the generosity and hospitality of all we’ve met

I have no idea what or how any of this will work out, some of it is “wait and see”. I understand that we are a small part of both exhibits, but, oh my, it feels very big to me.

Again, I wonder about how people and events coalesce, how everything and everyone is somehow put into place, for all this to come about. Had Jeff not presented my father’s paper, this woman would not have thought to recommend us for the exhibit. Had my children not taken the day to travel to Lyon to research his work, we would not have had these architectural designs to show the curator. And, had we not mentioned that we were planning to be in Hangzhou at that time, this person may not have thought to pursue the exhibit there.

I have felt my father’s hand guiding us, no time more evident than when we were in Paris, leading us to places that we needed to be at, and to the people who could help bring out his work.

And, Jeff’s presentation has definitely brought  my father’s work from the stage of  research to a more public one. Once again, it feels fitting that this exhibit be held in Paris and that it will represent his architectural designs, created from skills he learned at the Beaux Arts.

And, if the Hangzhou exhibit works out, that too feels fitting since one of his first major projects upon return to China was to co-found the Educational Institute at the Hangzhou Academy of Art. He was Dean of Interior Design Department there. And, more recently, the educational building he originally designed was an inspiration for the 2010 Shanghai Expo. 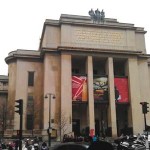 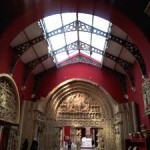 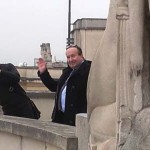 Matthew and Emmanuel on Rooftop