Reflections of Paris and Father 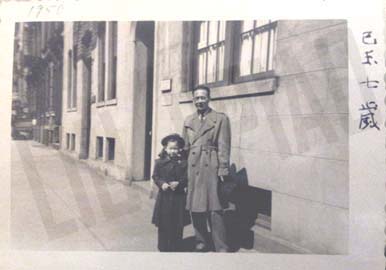 It’s early morning, the day after the conference, and I can’t sleep.

I woke up in the dark, feeling emotionally raw as I gaze outside my bedroom window at the Paris rooftops, waiting for the dawn to come.  I reflect on and attempt to allow my mind, body and spirit to absorb the very personal impact of attending the conference, and in particular, Jeff Cody’s presentation of my father.

I remember my first time in Paris, receiving a glimpse of him as a young man, with his whole life ahead of him. What I didn’t realize then was how he had already started to execute his dreams as a student here, how proactive he was in implementing his vision of melding Chinese and western art and architecture as his way to help build the very newly formed republic of China.

As I write, I sit here weeping, tears rolling down my face.

I weep for him, that he was forced to bury such talent so that he could provide for his family, so that his children would have a future.

I weep for him, that in the last two decades of his life, although he never recaptured the status that he enjoyed in Paris and China, he was able to go back to the art and architecture that was his life’s blood, if only in a quieter way.

I weep now with joy for his gift to me and my children, the heritage that he has bequeathed us, tangible pieces of  his art that is our heritage. The shadow of his struggles in America, the defeat he carried in his psyche and how that impacted on my own life, fall away. It is replaced with a new knowledge of this vibrant man who was my father, stepping forward to forge a new China against many odds.

He gives me the strength and courage to step up and contribute in ways I’ve always stopped myself before this.

It feels altogether fitting that the first public presentation of his works is here in Paris, the place where it all started for him, the place that nurtured his spirit as a young man.