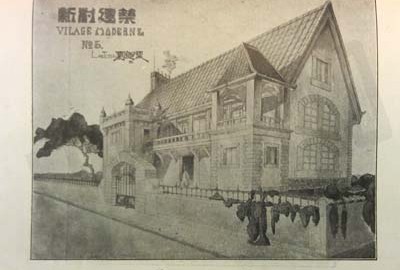 Ok, so our Nanjing House Rediscovered isn’t quite accurate, we always knew it was there.

that was debuted in 1929.My grandfather, Liu Jipiao’s company, Da Fang Construction Company ( 大方) built it . My mother, Gayook visited it in 1985 and I saw it in 1986 while studying at Nanjing University (南京大学). It was a large house with several wings.  Mom says there was even a ballroom!

Back when I saw it I was told that it was occupied by a Communist General.  When I asked why he wasn’t paying rent or something, my grandmother told me that he didn’t pay rent because he paid for a third floor to be added to the structure.  At the time I thought it unfair since we didn’t want the third floor put on in the first place.  Nor did it seem that my grandparents were happy about him being in our house.

So when I went to visit it with a fellow student in tow, I boldly walked onto the property and announced to the housekeeper who came out that I was the granddaughter of the owner of the house and proceeded to walk around outside taking pictures without waiting for permission.  I wonder what I would have done if the General had been home. I have to say that at the time I was much younger and more impetuous.  “And why should I need permission to walk around my own house??” I had thought indignantly. Looking back on my time in China makes me appreciate the privileges that I take for granted here in the States.  But that’s another story…

Today our house in Nanjing has been renovated again and house the Confederation of Charities of Jiangsu Province.  It looks very much like a rendering Liu Jipiao did as part of the Nanjing Capitol Plan (see gallery below) It would be amazing to find the original blueprints for this structure!  I figure they must have used something for the renovations.

We are very grateful to Dr. Jeff Cody’s son, Aaron for this lovely description and photos of the house.  He is currently in Nanjing and was kind enough to do some recon for us.

Yihe Lu is a quiet street–for a Chinese city– removed from the main streets with trees lining both sides of the side-walks. While biking up the street, I rode past two small playgrounds, similar to what you might find in Paris, little gated off playgrounds, taking up the space of maybe one house-lot or less. There was on playground for each of the intersections I passed on my way down Yi He Lu. The houses on the street all seem to have distinct and unique styles, more modern, certainly than the regular concrete box buildings which are common in Nanjing. While they all have different designs, many of the houses (number 9 included) are hidden behind pale yellow (wedding cake) concrete walls or at least the ground floors are. Also, most of the buildings, despite their styles, seemed to be made of concrete, not wood or and other material.

On my way to #9, I saw a building that looked as if it was a renovated barn, but what first appeared to be wooden panels were actually concrete slabs, poured to look like wooden panels. I found something similar at #9, which looked as if it had been modeled off an old Victorian house…The building has the color as the walls which line the streets, but towers over them with a well designed roof which is quite eye-pleasing. After trying to document the house as best I could from the outside of the locked gate, I shouted through the gate, “Nihao, Yao ren ma?” and after a few goes, a weary looking security guard opened the door for me and let me in to take a few more photos.

Inside the courtyard, there is a beautiful garden, with big shade-giving trees and a nice path. I walked around back, and it looked as if some renovation was going on indoors, so I didn’t go much farther. As I was leaving, a woman with fancy Nikon camera, with an enormous lens walked by the house, and snapped a picture or two of what she could see over the gate, and then walked down the road, photographing other buildings on the street. I imagine that she was a architecture student, looking at the strange, quiet neighborhood full of distinct houses, including, Liu Jipiao’s building at #9 Yihe Lu. 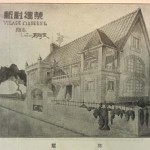 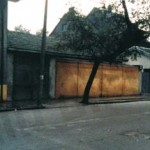 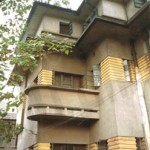 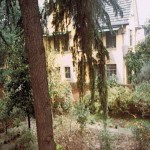 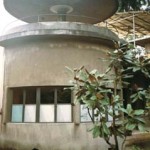 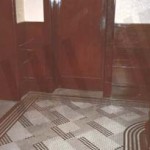 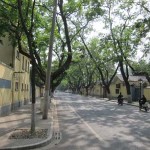 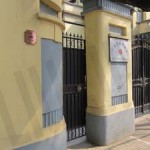 Confederation of Charities of Jiangsu Province 2013 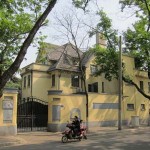 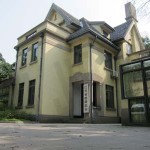 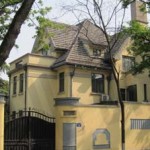 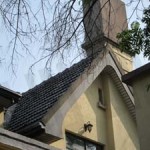