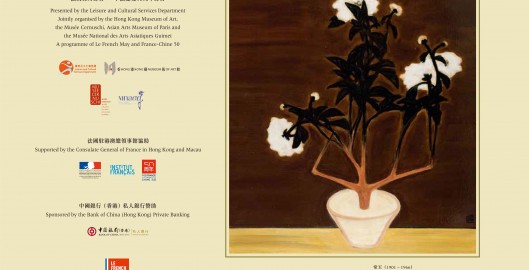 We are happy to announce that Liu Jipiao will be involved in a new exhibition in Hong Kong this summer! We also would like to wish all you dads out there a Happy Father’s Day!

Back in 2011 the Musee Cernuschi held the exhibit,  Chinese Artists in Paris. The curator, Eric Lefebvre has since moved over to Musee Guimet in Paris. He was asked to create a similar exhibit at the Hong Kong Museum of Art. I was able to speak with him on our last trip to Paris. He was interested in using  Liu Jipiao’s work.

The new exhibit entitled, “Paris – Chinese Painting: Legacy of 20th Century Chinese Masters”  runs from June 20th – September 21st. It celebrates the relationship between China and France in the 20th Century and is part of the Le French-May Festival.

Before closing its doors for renovation work until 2017, the Hong Kong Museum of Art will collaborate with the prestigious Musée Cernuschi – which specializes in Asian Art – for this fascinating exhibition. Around 100 pieces from their extraordinary collection of 20th-century Chinese paintings will be on show alongside others from major French institutions that include the Musée Guimet, Musée d’art Moderne de la ville de Paris, and the Centre Georges Pompidou. Collectively these paintings illustrate the impact that the exotic French experience had on generations of Chinese artists, and their influence on the development and reformation of Chinese painting in the last century as expressed by artists such as Xu Beihong, Lin Fengmian, Pan Yuliang, Sanyu, Pang Xunqin, Zao Wou-ki, Chu Teh-chun and Wu Guanzhong.

One of Liu’s images will be in the catalog and he will be mentioned several times in the write up. We are very pleased to see his name alongside his illustrious cohorts once again! We hope it’s a fitting Father’s Day present for my grandfather!

More information to come when I can get my hands on one of those catalogs. Meanwhile you can view the invite below:
Hong Kong Museum of Art Invite