In About Liu
America 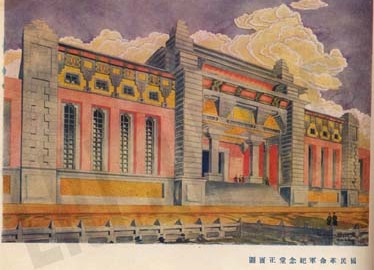 Well I finished my lecture and I just got back into Los Angeles this past week. I still have a lot of notes to go through, emails to write and many thank you’s to send out! I had a wonderful trip and met some great people and reconnected with some old friends! Stay tuned for the full video of the talk! Meantime I’d like to tell you about a new article by Zheng Hongbin.

I was able extend my stay at Smith through the weekend and worked with Fu Ji on a translation of a new article that was brought to my attention by my scholar friend, Weng Tongrun in Shanghai. A Phd at Tsing Hua University named Zheng Hongbin recently wrote a paper entitled, “Blending China and West to Create Chinese New Architecture: Liou KiPaul’s “Art Architecture” and its Interpretation.” I was excited about this paper for several reasons. What caught my attention right away is that he used my grandfather’s American given name “Kipaul Liou” vs. the usual Liu Jipiao. Plus this scholar decided to focus on Liu’s work before and after the Westlake Expo 1929 as so many scholars have already focused on that. I was interested to hear his thoughts.

One important observation that Zheng makes is that Liu’s design at the Paris Exposition in 1925, as well as the work exhibited at the Strasbourg Exposition a year earlier in 1924 was influenced more by Art Nouveau. It wasn’t until after Liu had been exposed to Art Deco at the Paris Expo in 1925 that he moved from curves to more straight line designs as seen at the Westlake Expo and his Nanjing Capitol Plan renderings.

If you would like to read the paper in it’s entirety in Chinese, you can download the pdf here:
Blending China and West to Create Chinese New Architecture: Liou KiPaul’s “Art Architecture” and its Interpretation.
by Zhong Hongbin

I am hoping to get in contact with Zheng Hongbin and hope he finds this website. If anyone can get in touch with him, please let him know I am reaching out! He can contact me through this website or my email address is liujipiaoart@gmail.com. That goes for anyone else who may be studying my grandfather, please contact me! My family and I would love to hear from you!

As a side note: I have noticed that most Chinese scholars write that my grandfather died in England. There is an online article in Chinese that states this and I believe they are all working off the same source. I would like to set the record straight. In his later years Liu Jipiao and his wife moved to “Manchester” but it was Manchester County, New Jersey not Manchester, England. I can understand the mix up. They lived in a retirement community in Crestwood Village until my grandfather died April 15, 1992.