In Loving Memory of My Mother Suzanne Liou 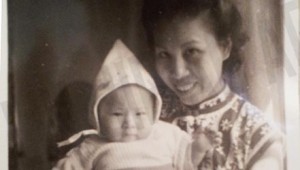 While this website is  primarily about my father’s artwork, with Mother’s Day just past, my thoughts naturally turn towards my mother and the part she played in our lives. So this is in loving memory of my mother Suzanne Liou.

I was no different. As I was growing up, I always thought she was weaker than my father, always telling me how great he was, how  she was  following his lead.  It wasn’t until much later, and especially now that Jenn is discovering his place in Chinese history, just how much she had lost as well as my father.

My parents were married for 10 years before I came into the picture. My mother told me that they lived a “jet setting” life. My father was rich, famous, and held a prominent position in then President Chiang K’ai Shek’s government. In many ways, her life then was like a fairy tale. She told me that she and her “girlfriends” would play all day.  She would never know how many guests he would bring home for dinner, but it didn’t matter because she had a house full of servants to do her bidding. Then, afterwards, both would hold court, perhaps reminiscent of the literati salons in Paris. She ran his household and was his hostess to prominent officials, scholars and celebrities – a position well suited to her “social butterfly” personality. When they weren’t home, they traveled all over China – sightseeing, visiting friends, climbing mountains, even hunting – and because of his position, they were treated as honored guests everywhere they went.

All that changed overnight when we fled China to come to the U.S. Preparing to leave, she learned for the first time in her life, how to cook a few dishes. (I must say, cooking was never her strong suit.) She was told that she’d have no servants in America. But, she, like my father, didn’t really prepare to live in America. They thought they’d sight see a year or two, then go home. So, they didn’t bring all their money, nor my father’s artwork.  And, she  never expected to have to work and take care of a family all by herself. To say she was ill prepared is an understatement. Yet, with a will of iron, this petite 4’10”, 82 pound woman, persevered.

When my father opened a laundrymat in NYC, she was the one who opened the doors every morning, came home to take me to school, returned to the shop to work alongside my father, picked me up from school, then returned to close up.  Then, she’d come home to cook dinner and do other household chores. Not only had she been a spoiled rich wife in China, she was also sickly throughout her life. So many of the chores her sisters had to perform at home were never required of her.

Later, when my father purchased a chicken farm in NJ, she worked side by side with him – feeding the chickens, gathering the eggs, candling and packaging them for pick up. Later, when we went bankrupt from our NJ chicken farm, she was the one who went out to work to put food on the table.  She even learned how to do massage, then taught my father, so that they would have a viable skill.  My father, on the other hand, hung onto to a mere 800 chickens and purchased a $4000. automatic feeder, refusing to believe that the farm had failed. He became even more depressed and constantly talked about suicide.

It was also at this time that my father told me he had no money for me to attend college, suggesting that I go to beauty school for 6 months, then I could earn money to help the family. For the first and only time in her life,that I recall, she stood up to him, “My girls are going to college”. She then turned to me and said, “I don’t have money to give you, you’ll have to work or find another way. But, I will go out and work so that you don’t have to bring home money for us anymore”.

It was because of her that I have a college degree and a chance at a better life than they had.

In between working, helping to feed us and keep a roof over our heads, I also remember my mother as one with her many talents.  She sang, played several instruments, and drew her own patterns for sewing and knitting.  She taught me Chinese songs, drawing with me (although that was clearly not my forte), playing children’s games and taught me how to knit and embroider when I was 5. Except for the one Christmas when the farm went bankrupt, she would take me shopping for gifts – Macy’s and Bloomingdale’s in NYC – where she would let me pick out the one toy I wanted. She also made all my clothes during the bankruptcy years. An artist in her own right, she and my father painted, taught, and exhibited their art together.   He taught her the long lost art of porcelain painting, she forever the student, he the master.

She kept her marriage vows and, in the Chinese tradition, was always and forever the “perfect” wife, staying with him “for richer or  poorer”. My father was the love of her life, her only wish was to make him happy. And, looking back, I know she kept him from going off the deep end and from committing suicide. And, in so doing, gave her daughters a home, a father, and a mother. It gives me joy to know that they lived their last years together in peace, doing what they loved most, and doing it together.

This  post is to commemorate her life and her indomitable spirit.

I love you, Mama.