So I’m sitting at a cafe at Smith College writing this, finally calm and finally relaxed. Lecture accomplished! I was pretty nervous. I’ve taught and lectured  before but it certainly wasn’t as personal. The night before I was up practicing til about midnight but then my brain wouldn’t shut up until 3AM!The exhibit “First Generation of Chinese Artists in Paris and Their Legacy” was interesting and informative. From left to right Fu  put together a timeline of several major events that occurred from 1912 to 1949. From the fall of the Qing Empire to the rise of Mao and the Communist Party. Then a dvd display ran on a loop that featured images of Liu Jipiao’s life and his artwork. Next to that was a framed black and white print by Zao Wuji and a black and white ink painting of a pine tree mounted on a scroll by Liu Haisu.

The newborn Republic of China, facing internal and external threats, struggled to rethink its traditions and looked towards Europe for inspiration. The embracing of western influence gave birth to a new generation of Chinese artists. They departed for Paris during the interwar years, carrying the mission of reforming Chinese ink paintings with western influence. Focusing on the works of three artists, Liu Jipiao, Zao Wou-ki, and Liu Haisu, accompanied by an illustrated timeline, this installation aims to highlight several key endeavors from this history of cross cultural exchange and the legacyof these artists in shaping China’s modernity. ~ Fu Ji, Smith College ’14

The big day finally came and I forced myself to eat and go over my notes. I knew the material backwards and forwards, it was just a matter of getting it in the correct order. Well, the entire lecture was recorded so I will be posting that up once I get my hands on it. So far the feedback has been positive and people are saying that it was entertaining, funny, dramatic and sometimes sad. They didn’t think I was nervous at all…whew!

The speaker that followed was Joan Lebold Cohen. She graduated from Smith in 1954 and she had donated the ink painting by Liu Haisu that was displayed. What an interesting woman and quite an entertaining speaker! She was gracious enough to compliment my talk and said she wished she had gone first!

Joan has had such an interesting life! She was in China and Hong Kong in the late 1970’s when most Americans were not even allowed into the country. I will be meeting her in New York this week to continue are conversation. She says she has a list of books I should read in reference to the time period I’m researching!

On a side note I had the extra treat of seeing one of my childhood friends who I have not seen in over 20 years. She and her friend who graduated from Smith drove down to see the lecture. We got a chance to hang out afterwards. Well I’m off to Wesleyan University to have lunch with the curator of the Mansfield Freeman Center of East Asian Studies and then off to New York City! 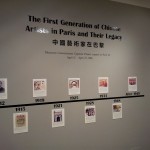 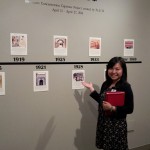 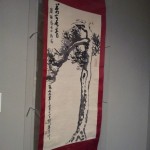 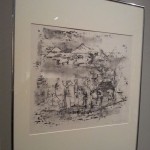 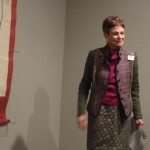 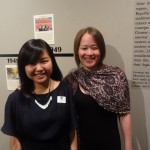 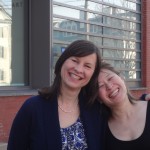 Anne Marie and Me