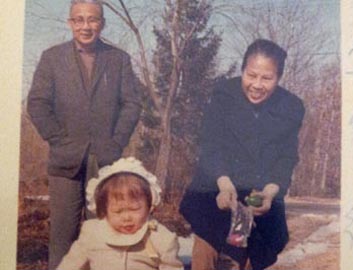 Jenn wrote about her first official lecture at Smith College in Massachusetts in April. I’m very excited for her, as this is not only her first official presentation of my father’s work, it is also the first time she will be doing this without the rest of the family tagging along.

My baby is leaving the nest! Again!

I’ve spoken about what discovering what my father’s work means to me over several past blogs. But, I’ve never spoken about what this means for Jennifer – from a mother’s perspective, of course! To me, it looks like everything is coming full circle for her from the time she attended Wesleyan University in CT and majored in East Asian Studies, taking a year to study abroad in China. After all these years of taking on jobs that didn’t have much to do with her major, her research not only establishes our family lineage, it has brought her back to something she loves to do – research, analyzing the historical context, and putting it down on paper. Who would have thought that it would be my father’s artwork that would bring her back to this first love.

It always amazes me not only how things come full circle, but especially in this case, the connection of familial generations. Looking back on Jenn’s work life up to this point, it almost feels destined that she would be the one to delve into this arena. She first worked in the art buying department for a NYC ad agency where she negotiated rights for photography usage for print production, which then led her to a job at a stock photo house doing the same thing. Later, when we lived in Hawaii,  she taught swing dance at large conferences and ran team building workshops to organizations giving her experience in front of  audiences. Next, she worked in sales at a Chinese art gallery and  learned about reproducing (giclee) prints. While selling artwork, one potential customer offered her a position in his architectural/construction firm in design and sales which gave her the understanding of my father’s architectural work. And, more recently, she designed kitchens and cabinet storage for residential properties. She  also developed websites for small businesses, which gave her the know-how and connections to set up this blog.

As she moves forward, digging deeper into my father’s lost art and architectural work, I can see a new career opportunity opening up before her. In her experience mentioned above, Jenn has the skills to bring Liu’s work back into the world, to place him in the historical context  of a time when China was struggling to reinvent herself within the fast growing international community of nations, and in the process to acknowledge her and our family’s part of this rich tradition.

One of the things that my father wanted most was the foreign cultural exchange of ideas. He deeply believed in the richness of integrating the ideas and principles of east and west, taking the best of both and coming up with something totally new, exciting and something better than individual nations endeavoring to survive in isolation. I can see Jenn, if she chooses, moving forward with more lectures, exhibits, producing limited editions of his work, even a book or documentary film with the express purpose of furthering the dream of foreign exchange in the arts when it was abruptly aborted when he fled China.

In 1997, I had the notion to arrange with my mother to move his works from her home to put them in a safe place. I’m not sure at the time I knew that it would come to this, the beginning of bringing his work back into the world, but I always felt that Jenn would be the one to do it. And, did she listen to her mother!?! 20 years later, she thought it was her own idea!

As I am one that looks at the patterns in which life comes about –  the timing, the people one gets connected to, events that bring one to certain places – I feel that this work signals for Jennifer a new chapter in her life.  And, after learning about her grandfather’s courage in the obstacles he faced to present his ideas to help modernize China, I wish for Jenn the same courage to follow something she feels passionate about and loves doing.

Jenn, Matthew, your grandfather and I will be with you at Smith College in spirit!