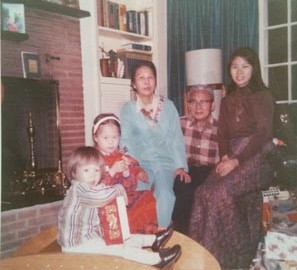 Happy Father’s Day! For this special occasion, I think it’s time for you to get to know his progeny – what we’ve become, what we’ve done with our lives , who we are – all  because of my father’s sacrifice to keep his family safe.

Jennifer, my father’s eldest grandchild, ironically, followed in his footsteps. Without formally studying art or architecture, she somehow found work in the field of construction, designing and selling kitchens, bathrooms, and now garages.

She started in sales part-time to earn money for college, working as a telemarketer, selling magazines. Although she had some of the highest sales in the company, she hated sales until she was able to develop her own personal style.  As far as design, she inherited that from my father, showing an innate talent for drawing at a young age. She still works part-time in the garage construction business, but more and more of her time is now spent doing her grandfather’s work.

Matthew, my father’s eldest grandson, has a natural talent for entrepreneurship. Combined with his innate propensity for athleticism, he now runs a business coaching pre-school and elementary age children soccer. He found a way to apply the game that he loves and played since he was 5 with the  marketing and networking skills he learned in college.

While I never saw my father market his work in the U.S., we uncovered information that he was very successful in marketing his construction business in China, so much so that he opened branches in Nanjing, Shanghai, Guangzhou and Hong Kong.

As for me, I married and stayed home to raise my children until Jenn turned 9, then went back to work. I held positions in college and corporate human resources administration before I went back to school for my Masters in Social Work after my divorce in 1980. At the same time, I studied psychotherapy with private trainers who taught me how to meditate. It was through meditation that I developed keen intuitive skills and, eventually, was shown that my father’s lineage of qigong* was passed down to me.

I opened a private psychotherapy practice and specialized in counseling trauma survivors. Using qigong and traditional psychotherapy, I realized that many of my clients were able to alleviate, some even eliminate, post traumatic stress disorder (ptsd). In the last few years, clinicians have discovered that complementary methods, such as qigong, meditation, guided imagery – to name a few – have a larger rate of success in dealing with trauma. And, to think that I was on the right track before.

There’s another story about how we started a family business in Hawaii where we taught and performed Swing Dancing, but that will be for another time. This is my way of honoring my father on Father’s Day. I hope that wherever he is that he knows that his sacrifice for his family was not in vain.

This past year and half, I have never felt closer to my father. I feel like he’s been with me and my family throughout our ordeal with cancer, guiding us through his life as a way to give us hope for the future.

*Qigong is a 4,000 year old Chinese healing art. It is the third leg of Traditional Chinese Medicine (TCM), the other two being acupuncture and herbal medicine. It is also the least known, but the most powerful of the three. And, while t’ai chi prepares practitioners for martial arts, qigong prepares practitioners for healing arts. Most masters, I understand, study both.