Handed Down from Father to Daughter 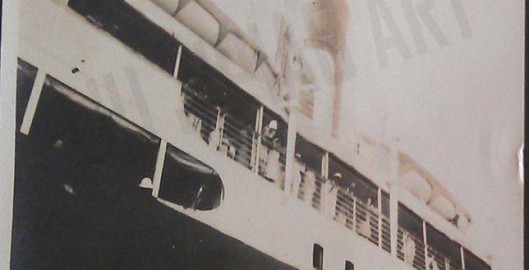 I ended the last blog by saying that searching my father’s life and work has given me the “gift of doing something with others that I most love to do – travel!” After Jenn read the blog (Jenn reads and edits all my blogs), she comments, “Mom, do you realize that you got your love of travel from your father?” I stopped short before saying, “No, I never thought of that!”

It’s very humbling to realize that something I love to do that I thought came from myself, was actually handed down from father to daughter.  It does make me wonder how much, positive and/or negative, do parents pass down to their children?  And, for the children, how much of their likes and dislikes actually come from their parents?

If I am any indication… a lot!

You see, he never traveled with us. Of course, now I realize that it was because we couldn’t afford it, and he was busy working 12-14 hours a day, 6 days a week! But, as a child, I didn’t put those things together. I do remember him talking about the places he’d been to when he was younger, but to me, they were just stories since I never got to experience different locales.

I knew he studied for nine years in Paris. And, in that time, he told me, he traveled the world. I don’t know all the countries that constituted the world for him, except all over Europe, China, and his honeymoon in Japan. I remember him telling me that the day after he had his appendix taken out, he climbed the Swiss Alps. And, I remember him telling me that he visited friends in German, some of whom came to visit us in NYC.

BTW, research that we recently received shows that he and some of his fellow classmates, i.e., Lin Fengmian and Lin Wenzheng, lived in Germany for 6 months before returning to Paris. Who knows where else he landed! Since money wasn’t an issue, he was free to travel where he liked.

As I finish writing this last sentence, another realization enters my thoughts. In 2010, I was thinking about what I wanted to do with the rest of my life, what were my dreams? Via meditation, the answer that came through was that I didn’t just want to travel and be a tourist. I wanted to live in one place for a period of time, to get immersed into the culture and even the language. It was shortly after that “dream” that I went to Bali and stayed for 6 months, then ended up in Singapore for another 6 months.

Now I am once again realizing that even in my desire to live in different cultures comes from him.

Actually, I have always wanted to move to Paris, ever since I first went there in the late 1990’s and realized that I have roots there. But, somehow, life took different turns. Now, however, I feel even more strongly that I need to, again, follow in my father’s footsteps and live there.

I know not why.

Perhaps, it is to complete something he left unfinished. Or, perhaps, it’s a way for me to understand the young man that became my father. And, in that understanding, a way to know how I can best contribute in this last phase of my life.

And, if not for those reasons, does living in Paris require any reason anyway! So, for those reading this blog, if you know of anyone who would like a boarder in Paris, I would be so grateful for an introduction!