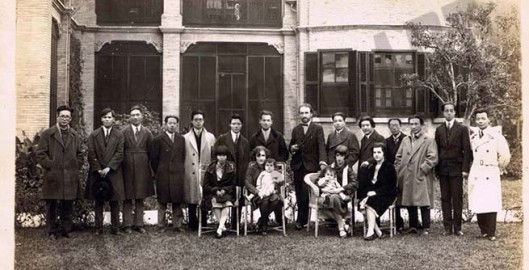 Thanks to friends old and new..

Just last week our friend Kenneth Klein from the USC East Asian Studies Library was visiting.  He was telling us about a new digital project he’s working on. More on that later…We were going through some old photo albums and my mother recognized the photo of beautiful Chinese woman in our family album.  “Oh, that ‘s Auntie Suzanne!  Her husband was a Swedish diplomat!” She remembered that her family and ours knew each other in Shanghai and later NYC. What ever did I do before Google?! I tracked down her son, who is still in NYC (he remembers my mother and her family very well!) We all had a wonderful conversation about the past and he suggested some places where we might look for more information! He has a very good memory and told us that we were not the first people to approach him with questions about their grandparents!

Last month one of the professors we met in Paris from Tongji University (Prof. Lu Yongyi) introduced us to one of her architectural students doing her Masters Thesis on Liu Jipiao’s work between 1928 when he returned from Paris to 1947 when he left for America. Wen Tongrun is incredibly organized and hard working!  She was able to compile a very comprehensive list of all Liu’s articles and photos and sent them to me in digital format!  I was able to contribute a little bit but she deserves all the credit! She sent me website links where I can purchase some of the original magazines in which Liu published! By the time you read this I will have purchased them with the help of my friend Julia Grimes who reads Chinese, thank God! She also sent us a recent book on the Westlake Expo 1929 via mail from China. We should get that in about 2-3 months 🙂  We are slowly on our way to having our own Liu Jipiao collection!

Learning about my grandfather and our heritage is truly fulfilling and I often feel very humble doing this work in his name.  But I have to say that what makes this journey so wonderful has to be all the people we meet along the way! Your excitement and enthusiasm encourages me to keep moving forward, digging for more information, sharing with everyone the new discoveries… So thank you once again.