Every time I go to Paris, I learn more about the father I never knew. This time was no different!

Emotions overwhelmed me as Curator, Emmanuel Breon’s guided VIP tour reached my father’s display during the L’inauguration of the Art Deco Exhibit  at Cite de l’architecture et du patrimoine on the evening of October 14th.

It wasn’t the photos depicting his 1925 Paris Expo and 1929 West Lake Expo in Hangzhou, China – by now, I’d seen them many times over the past year and half.

What struck me was the enlargement of his photo as a young man in his 20’s, with his whole future ahead of him. He was so full of life, his eyes – the gateway to the soul – poured forth such passion, such joy, such love. This was the father I never knew. When I grew up with him, the light that I never knew he had, had already gone from his eyes.  Nor, did I ever realize that at one time, he was a force with which to be reckoned.

When Emmanuel turned to me say a few words, I was so choked up, I couldn’t speak at all. Of course, he spoke in French, so by the time my mind translated his request, the moment had already passed. Fortunately, I was able to pull myself together before the tour continued along its way, so I motioned to him that I wanted to say something.

Even now, I’m not so clear what I said, probably my shock that I didn’t know about any of his contributions prior to Jenn’s research, what that has meant to me and to my children. And, how grateful our family is that his first major display since our escape from China to the U.S. was in a country that shaped him and his life dreams as a young man. I think I remembered to thank Emmanuel and Cite for making this possible. However, I forgot to introduce my children and the hard work they have put into making all this happen.  My apologies, Jenn and Matthew!

When Jenn first started to research my father’s work, I don’t think any of us realized what an incredible journey this would take us on, as  individuals and as a family.  Speaking for myself, I am coming to know the part of me that I hadn’t known about him – his passion to follow his calling, the courage and perseverance it took to display his works in the 1925 Paris Expo when China didn’t financially or politically support their Chinese artists in Paris.  Somehow, he and his colleagues made it happen anyway!

When I knew him, his spirit gone, I was not given the role model of a successful man, one who loved his life, and helped to build a modern China after he returned from France. This newly formed role model in my life gives me the inspiration and courage to live again after my second bout of cancer.

I am so grateful to Jenn for doing all the research and maintaining the contacts to further his work. I am also grateful to Matthew for digitizing all the artwork and for taking on the majority of financial support  to afford Jennifer the time to pursue this avenue.

I hope, as their mother, that this glimpse into their grandfather’s legacy will show them what heights of accomplishment and joy they can aspire to and attain. 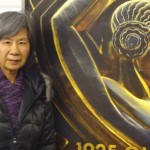 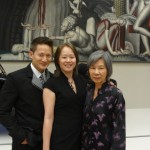 Matthew, Jenn and Gayook at Exhibit in Paris 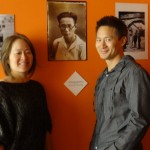 Jenn and Matt at Exhibit

Posted in About Liu, Family Story