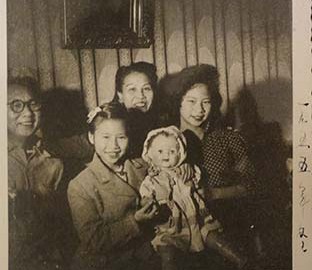 The holiday season is upon us, so fast, I don’t know where 2013 went.  It is time like this that thoughts of Christmas memories past with my parents come to mind.

It was my mother who always organized the celebration, for the three of us, then when my sister, Gaylon, arrived, for the four of us. Mama went along with the whole Santa Claus myth, even though I’m sure that was so foreign to her Chinese cultural background. She made it exciting for me, taking me to look at toys at Bloomingdale’s, walking on 5th Avenue and looking into all the holiday store windows, and seeing the Rockefeller tree all lit up. However my parents struggled with finances, she made sure that we each got one major Christmas gift – for me, it was the latest doll.

That all stopped one Christmas during the time of our bankrupt chicken farm. I was a freshman in high school. It was the first and only time that we couldn’t celebrate Christmas. My father and sister stayed home to take care of the paltry chickens we had remaining. My mother and I stayed in the employee boarding area of the hotel in which she worked, 12 miles from home. She got a menial position as the attendant in the spa locker room. I helped her with customers during the day and babysat at night to make extra money. Gifts were out of the question, let alone spending it together as a family. It was a matter of survival.

My mother openly stepped up and  became the rock of the family. She had been all along, working beside him – doing the most menial tasks that were “beneath” him. My father, at this time, fell into a dark hole, his long term depression falling into suicidal ideation. It was all he talked about – what a failure he was, how he couldn’t support his family, how he wanted to end it all. And, my mother trying so hard to keep food on the table, at the same time supporting him emotionally. It was at this time that she told us children how famous he was in China. And, in my teen mind, all I could think of was, “What good does that do us now, when you’re worried about what to eat the next day!?!”

I didn’t have much pride in my father then, he was paralyzed to support us. It is only now that, after learning about his contribution to China and the esteemed position he held there, that I can understand what was taken from him at the prime of his life. All I could see then was how he let us down, how he would let his wife and child support the family, while all the time living in his past glory. Psychologically, I didn’t understand then that, if he hadn’t held onto his past, we definitely would have lost him. And, without him, even though my mother took on the role breadwinner role, we most likely would have lost her too.

I see now that she took on that role, enabling him to perpetuate the belief that earning a menial wage was beneath him. He got to hold onto his pride, which was all he had left, and with that, his life. And, she got to hold onto him. And, we didn’t lost either parent.

For that, I am most grateful. As I fast forward to this year, I realize once again how much my children and I are blessed to be given the knowledge of his past accomplishments as well as his hardships and failures, to understand that his and my mother’s struggles define who we are today and the opportunities they have afforded us, with their successes and their failures.

Perhaps, as my children and I come into this Christmas season and the upcoming New Year,  we  feel how blessed we are to fully know from whence we come, that with forgiveness comes an understanding and the opportunity to live more compassionately.