Another Gift From My Father 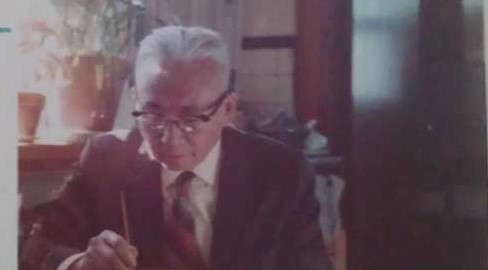 As a child, your father is simply your father. It isn’t until you’re grown, and sometimes not even while he is alive that you realize what gifts he’s passed down to you. I was no different.

I always knew that my father was this talented artist.  When I was younger, and fathers are like gods, I used to watch him paint. He would take the brush, rapidly mix the ink and water, and poof, out would come this instant painting with funny writing on the side. I didn’t realize at the time that he was a genius at his work. I just thought everyone could paint this way.

I think I began to realize painting wasn’t so easy when he tried to teach me. Only, I had no aptitude whatsoever for drawing or painting. And, with no aptitude, I also had no interest in learning or even continuing to watch him as I grew older. But, thinking back, I remember how effortlessly the pictures would flow perfectly onto the paper, and how he would finish a dozen or so in a very short amount of time. In adulthood, probably after I had both my children, my mother told me that he was a child prodigy, that while he was a trained artist, he had this innate talent long before he even studied art.

It is only now that I’m putting together the puzzle of how he painted so quickly, how perfectly the pictures and calligraphy (those funny letters on the side) were formed. It comes from his practice of qigong, an ancient Chinese healing art, now done as an exercise for health or practice for martial arts. Qigong masters exhibit an effortless flow in their work, in their thought, and in the way they view and live life – that there is a flow to everything, and we need to find that particular flow within each of us.

I didn’t know it was the “qi”, which literally means “breath” or “life force”, that first flowed through me as healing energy.  My mother later told me that qigong, literally translated “work of the life force” was passed down to me from my father’s lineage.  My father inherited the “qi”, but he didn’t use it for healing or martial arts. It came through his art and the calligraphy which are actually poems written to depict what’s in the painting.

After my first and only trip back to China, poems started to come into my thoughts, so fast, so unexpectedly, and usually at the most inopportune times, i.e., in the shower, driving the car, etc.  I was so shocked because I never thought of myself as a writer, let alone a poet. I believe the poems came to me as a way for me to make sense of my spiritual journey home and also of my life up until that time. These poems also became my first published book, “Bridge Across My Soul”, and my daughter, Jennifer, not only illustrated it, but also wrote all the poetry in calligraphy. Yes, Jenn has probably not told you, but she has received this artistic strain from her grandfather. And, as you can see, this was definitely a multi-generational family affair.

This memory surfaced only after I started my latest writing endeavor about my experience with cancer.  I definitely count cancer as a spiritual journey for me, a “bridge” to cross before I begin the next chapter of my life, which may very well be my last. That story, however, is for another time. After practicing qigong two days ago, I started to hear the words to the Introduction of this latest writing. Instead of running for pen and paper, I ran to the computer. It was only after I finished the Introduction in lightening time – around 45 – 60 minutes – did I finally realize that this is the same way my father painted and wrote calligraphy.

Another gift from my father. I am beyond grateful.