A Daughter’s Gratitude; A Mother’s Tribute! 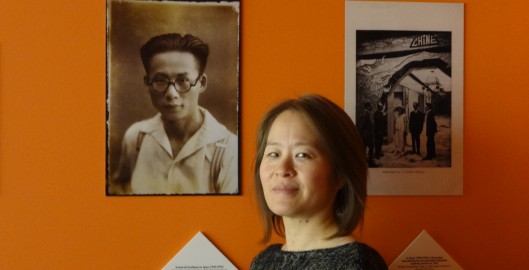 Since Jenn let the cat out of the bag about her presenting at the World Congress on Art Deco in Shanghai in November, I won’t go into all the factual details. However, as a very proud mother, I am entitled to some bragging rights. (For the Chinese and our Ancestors, please excuse this American part of me!)

Jennifer has worked very diligently since 2011, researching my father’s artwork in Paris and China. At the time, she was also taking care of me as I had been diagnosed with cancer as well as work part-time. My son Matthew, carried the majority of the financial burden so that she could do all of these things.

This family project came at a time that gave me something to look forward to during my illness. And, learning of my father’s achievements in such prestigious exhibits for the first time, gave me a wholly different view of the man with whom I grew up. I never knew he had been showcased in the Paris Expo of 1925, had designed and constructed the Hangzhou West Lake Art Deco Exhibit in 1929, and was one of the first Chinese architects to bring this style back to modernize China.  I knew him when he was a broken man, when he couldn’t pursue his passion in art and architecture in the United States.

This invitation for Jenn to present at the first World Congress on Art Deco in Asia is such an honor for her, a recognition not only of my father’s work, but also of her time, tenacity and research skills in “bringing my father home”. It is, for her, a homecoming as well. Even though she was born in the United States, she spent her junior year abroad, in Nanjing, then in Beijing. While that time allowed her to get in touch with her Chinese roots, it was also a time of confusion, of not knowing yet who she was, of what she was capable and doing so in a country and culture half way across the world from all that she knew.  She was only 21 years old then.

This time, she returns with expert knowledge and information that places her grandfather’s contribution in a China that was undergoing turbulent modernization following the foreign invasions during the last monarchy, the Qing Dynasty and the political bid for power after the death of Sun Yat-sen, the Father of Modern China. While she looks to gain more knowledge and access to her grandfather’s work in China, I hope that she recognizes that it is her findings that will secure his place in the history of the homeland he so loved.

Sadly, neither Matthew nor I will be attending the conference.  With the recurrence of cancer, my health prevents me from going. And Matthew, well he is a new adoring father who won’t be leaving his baby girl.  So, this time, we will be with Jenn in spirit and hope to come another time.

Jenn, my heart bursts with love and pride for your willingness, your persistence and your love of family. You refused to let our family’s role in Chinese history disappear. It seems fitting that this is all coming about during what would have been Liu Jipiao’s 115th birthday on June 4th.

P.S. Speaking of birthdays, did I mention that Jenn celebrates her 50th birthday on November 3rd, during the Congress. How fortuitous is that!?! Wouldn’t it be wonderful if she presented on that day!