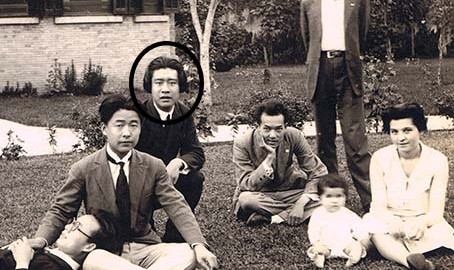 It’s THAT guy! I started researching Liu Jipiao’s life in 2011. Since then the image of one man kept reappearing throughout the pages. What caught my attention was that he was all different ages. So that meant he was with my grandfather for a long time.

Unlike Lin Fengmian and Lin Wenzheng, I couldn’t find anything on this guy. He was in Paris, Hangzhou photos as well as family portraits sent to Liu in America. It looked like he was very close to Liu. I pointed him out to everyone I talked to about my grandfather. Even this past month when Jennifer Chang from the AMCA (Archive of Modern Chinese Artists) came to visit we were still puzzling over who is this guy!

It was not until last night when Fu Ji came into town that we had a breakthrough! She had just finished her internship program at the Metropolitan Museum of Art in New York City and had a long layover in Los Angeles. So she stopped by to have dinner with us until her flight to China left later that evening. After which she heads to Paris for a 2 year program at the Louvre.

We ended up back at the house and were going through the newest information. I had sent her Weng Tongrun’s Master Thesis to read. She focused on Liu’s architecture and theory mostly before he fled to America. On one of the pages is a black ink portrait that Liu painted of his dear friend Sun Fuxi. The sketch was published in 1932 in Nanhua Wenyi Magazine.

On closer examination we determined that this was the guy! The image that has been haunting me for the past 3 years! I was soooo excited! So who was he? What relationship did he have to Liu Jipiao? Weng went on to explain that they were very close friends. They were together in Paris from 1920 – 1928. Sun Fuxi studied art at Lyon Art Academy and later Beaux Art in Paris.

Sun Fuxi returned to China. He was co-chair of the Design Department at the Hangzhou National Art Academy  with my grandfather. He started Gongxian Magazine with his brother Sun Fuyuan. He recognized the importance of spreading new art to the masses through publishing. He approached Liu to publish a Special Edition of his architectural designs.

Sun wrote the opening article in that Gongxian Special Edition (Vol. 3 #6, July 25, 1928) “The Ripples on the Water Expands to Infinity.” In it he describes his friendship with Liu. He talks about Liu’s artist journey from art to architecture. And how they diligently worked together on this magazine edition.

Thank you Tongrun for putting it all together! Thank you Fu Ji for recognizing “that guy” when you saw the sketch! I am eternally grateful!