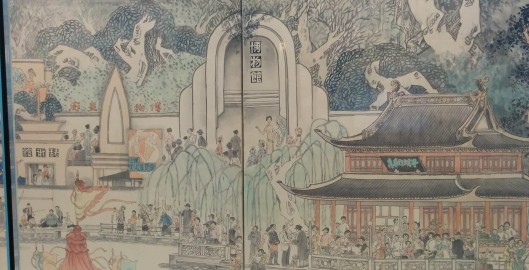 I was saddened to have missed Jenn’s presentation last November at the Art Deco World Congress in Shanghai, especially since it was where I was born. You can imagine, then, how excited I was to be able to attend Jenn’s lecture on the Queen Mary this past Saturday, August 20th, at the 12th LA Art Deco Festival. And, our whole family attended – my son, Matthew, his baby girl, Cayden, and her mother, Ellen. Cayden, the 20 month old great granddaughter of Liu JiPiao, is our third generation.  And true to form, she kept up a running discourse in her own “baby talk” and calling out “GooGoo” (Chinese word for auntie on the father’s side) every time Jenn stopped and started talking again. She broke the ice by yelling something, probably “Mine!” – a new word she picked up from her cousin recently. And, Jenn, just as a good auntie should, went off her power point presentation to respond to her favorite niece! Also, about a dozen or so friends came out to support us and share lunch with us afterwards. We are so grateful for their support over the years and, especially, for them to share Jenn’s first Los Angeles lecture on her grandfather’s work.

Jenn was very nervous weeks before the presentation, holing herself in her room the last few days to reorganize her talk – adding, deleting, practicing out loud and timing her speech. However, looking at her behind the podium, one wouldn’t have guessed all the butterflies in her stomach. What I saw was my little girl all grown up, being the adult version of the “ham” that she was when she used to perform solo in her dance and acting recitals. I know, I’m biased, but I’m entitled!

Jenn’s talk was a mixture of Liu’s historical contribution to China, his years of study in Paris and exhibition at the Paris Expo of 1925, his return to China as the first Chinese Art Deco Architect, then his escape and his struggles to acclimate to life in the U.S. This was intermixed with stories of the grandfather she knew, so different from the younger man whose whole life was ahead of him. And, it wasn’t until near the end of his life that he reignited his passion for art and architecture, teaching and exhibiting art locally and working in a small architectural firm. This was where he was the happiest.

What brought the most tears to my eyes was the conclusion. Jenn mentioned how honored she was to give me the part of my father I never knew at a time I was diagnosed with cancer. It was only through Jenn’s research that I finally understood what he lost and why he was always so sad. And, paying tribute to her grandfather, she thanked him for the legacy he left our family and for the privilege to bring him home to Shanghai.